My name is Jodie Underhill and I am the founder of Mountain Cleaners, a voluntary organisation based in Dharamsala, India. I’ve been back in Bhagsu for 3 weeks and about to embark on a very exciting adventure. I have lots of things planned for Mountain Cleaners this year and am pleased to report that things are progressing nicely.

Feel free to subscribe to this blog so I can keep informed about our achievements, trials and tribulations and of course the inevitable disappointments on our path towards a cleaner, greener India. We are all part of something very special and this is just the beginning. Hold on to your seats this is going to be a rollercoaster journey, I hope you enjoy it as much as I do. 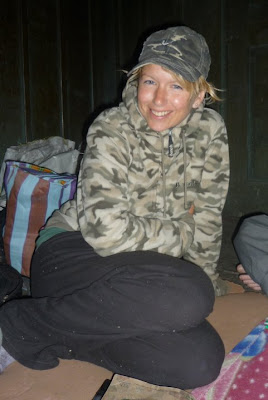 Jodie Underhill, the founder of the Mountain Cleaners was born in 1976 in Great Yarmouth, England. She is a committed environmentalist who enjoys world travel, fundraising, event organising and challenges. Previous jobs in the UK include legal editor, fundraising assistant, volunteer co-ordinator and carer for the elderly and people with spinal injuries.

She is the co-founder of two other groups - Love 4 Tibet and the Cornholme Community Project. She came to India last year to travel and learn about the Tibetan cause. She sponsors two children at the Tibetan Childrens Village in Chauntra. On arriving in Dharamsala, Himachal Pradesh in March 2009 to conduct letter writing workshops for sponsorship secretaries she was horrified to see the amount of garbage destroying the beauty of the local area. She started organizing mass clean ups in McLeod Ganj and went on to form the group the Mountain Cleaners in April 2009.

At the start of this year Jodie spent two months travelling around and learning about sustainable solutions in India such as waste management, rainwater harvesting, bio-gas & composting. Her experiences left her inspired and confident that positive and long lasting changes were possible.
Posted by Jason at 8:30 AM 9 comments:

“Leave Footprints, Not Garbage” - Garbage Girl cleans the home of the Dalai Lama 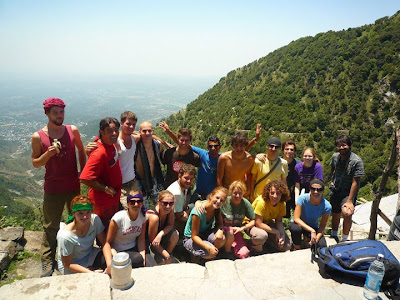 In the last 18 months the passion and vision of a woman from Norfolk, England, and the Mountain Cleaners, the organisation she founded, has cleaned up some of the most beautiful parts of the Himalayas with the help of hundreds of people from around the world.

Jodie Underhill arrived in Northern India to volunteer and was horrified to see the amount of garbage devastating the beauty of the area. The Triund mountain trek, in the Himachal Pradesh district, was a dumping ground for tones of unsightly waste. This area that is home to the Dalai Lama and Tibetan government in exile, is visited by thousands of tourists both local and international so Jodie started organising mass clean ups which developed into the formation of the Mountain Cleaners and earned her the nickname Garbage Girl.

The group has been watched with interest and has and recently received a ‘Green Hero’ award from the Centre of Media Studies resulting in TV news coverage and articles in numerous magazines, newspapers and websites across the globe.

Funded purely by donations, the Mountain Cleaners are not just about clearing an area temporarily. They are working alongside government organisations, NGO’s, local people, businesses, tourists and schools. Through a combination of direct action, liaison and educational awareness-raising they are providing sustainable solutions, ensuring that there are options for people to dispose of their waste correctly, reusing or recycling as much as possible.

Jodie says “We believe this model is simple and easily replicable at relatively low cost, and we are now expanding our activities to include larger players such as TetraPak, Indian Railways and Coca Cola.”

Talking to vendors in Triund and the introduction of a waste segregation scheme significantly reduced the amount of rubbish being burnt or dumped. Mountain Cleaners volunteers regularly collect waste sorted by the vendors and have been gradually clearing the garbage already discarded . Mules then help transport all the waste down the mountain. Recyclables are passed on to local waste workers to give them extra income and non recyclables are disposed of in the town’s waste container. Previously all this would have been debris thrown down the mountain sides or burnt, releasing dangerous chemicals into the pristine Himalayan air.

Local individuals and businesses have enthusiastically embraced the simple and effective changes. Thanks to them and the efforts of Jodie and the Mountain Cleaners volunteers, Triund is being restored to its natural pristine beauty and the model is currently being expanded and rolled out to other villages, remote mountain camps, trekking routes, pilgrimages and tourist areas.

The walls alongside the Triund Forestry Department now read ‘Leave footprints, not garbage’; a message that the Mountain Cleaners hope will stay with people long after they leave the Himalayas.
Posted by Jason at 8:05 AM 2 comments:

Welcome to the Mountain Cleaners blog 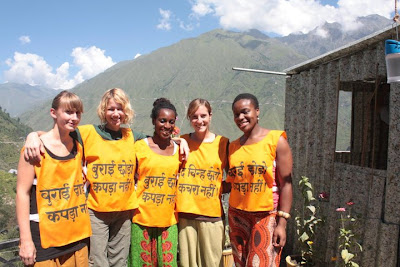 With the phrase "Leave footprints not garbage", the Mountain Cleaners aim to help restore parts of the Himalayas to their pristine natural beauty and this blog will help keep you informed.

The Mountain Cleaners are a group of volunteers who formed in 2009 in the Indian state of Himachal Pradesh. We are dedicated environmentalists who are committed to cleaning up India, little by little through a combination of direct action, liaison and awareness raising.

Our initial project, which is still ongoing, has involved working with the tea shops in a beautiful but increasingly rubbish stricken mountain camp called Triund, a four hour trek from Mcleod Ganj in Dharamsala, Himachal Pradesh.

We began our project by asking the tea shops of the area to stop burning and throwing their waste down the mountain. We asked them to collect and segregate their rubbish into two simple categories – recyclable and, non recyclable waste. Every week our volunteers check and sort the waste from the tea shops and work on clearing the back log of garbage that has been thrown down the hillside. We transport the rubbish down the mountain using donkeys.

The recyclables are passed on to the waste workers so they can get some extra income and the non recyclable waste is put into the town’s waste container. Earlier all of this rubbish would have been thrown down the mountain or burnt, releasing dangerous chemicals into the air. As a result of our efforts the area of Triund is slowly returning to its pristine condition.

We believe our model is simple and complete. We are not just about picking up rubbish and cleaning an area temporarily. Instead we want to work with local people and schools to provide solutions, ensuring rubbish is disposed of correctly and as much of it as possible is reused or recycled.
Posted by Jason at 2:53 AM 10 comments:

Who are the Mountain Cleaners?

Founded by Jodie Underhill in 2009, the Mountain Cleaners are a group of volunteers who formed in the Indian state of Himachal Pradesh and are are committed to cleaning up the Indian Himalayas, little by little through a combination of direct action, liaison and awareness raising.